As anyone who reads our blog will know, Bertie Boo is a regular feature - he's our gorgeous Springer Spaniel who we love dearly (those who have pets will understand this blog better than some).  Boo hasn't been well over the past few weeks and on Saturday we got the news that we'd been dreading and that is due to an aggressive cancer he will only be with us for a short time.  As you can imagine there were lots of tears in the vets but I have to say that Reena broke the news to us better than some human doctors would.

Bertie is twelve and a half and I like to think that we've given him a nice family and home life.  After we received the news we went to Harris & Hoole in Rickmansworth for a drink and so that Bertie could get some fuss from the staff in there - it's such a nice coffee shop and I love that they allow dogs. 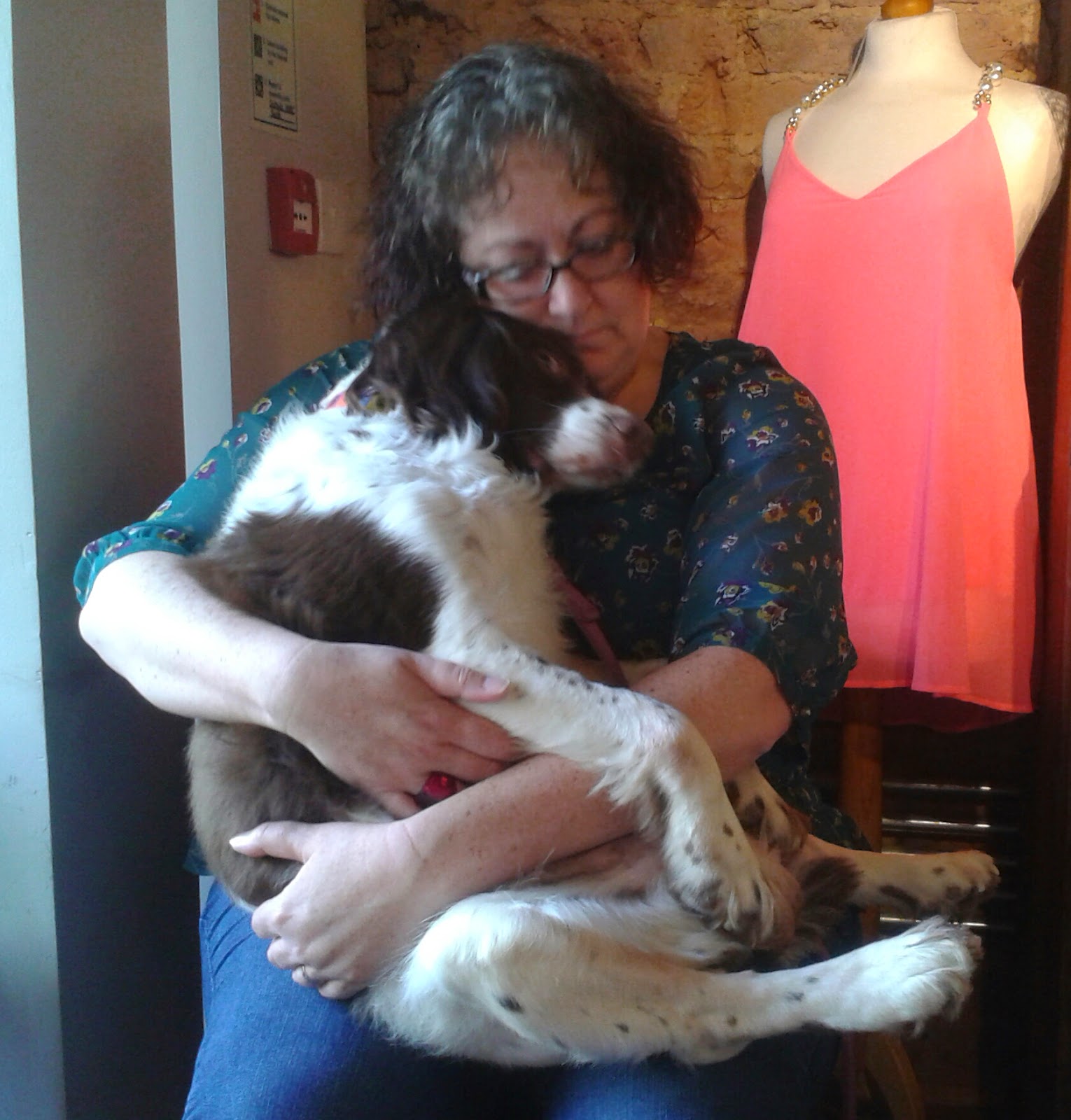 That afternoon the three of us had been invited to a birthday party and despite our mood we decided to still go - it was the correct decision as Bertie loved all the attention and as the birthday boy is a mad dog person as well, there were lots of dog treats to tempt our poorly boy with, and he got to sniff lots of other dogs bottoms.  The birthday cake was amazing - designed off a photo of their dog Orinoco. 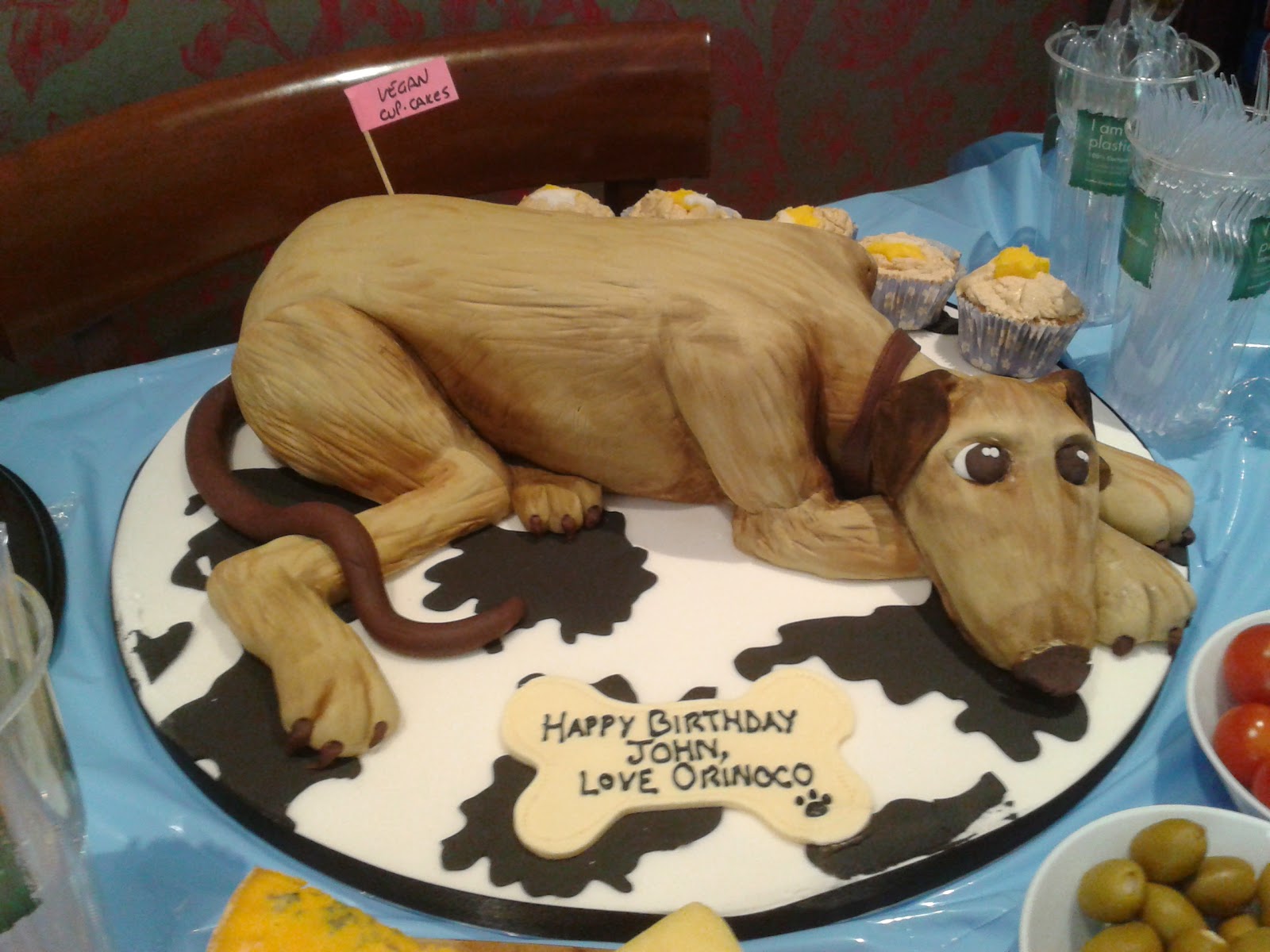 One of the first things I said when we got the bad news was that we needed to take Bertie to the seaside.  He loves getting wet and we're sure he's half water spaniel, so on Sunday we headed to Hunstanton in Norfolk - only a three hour drive, during which both Bertie and I slept.  I think Bertie knows that we're pampering him as when I told him to get in the car, for the first time ever he jumped in the front seat and curled up as if he belonged there. 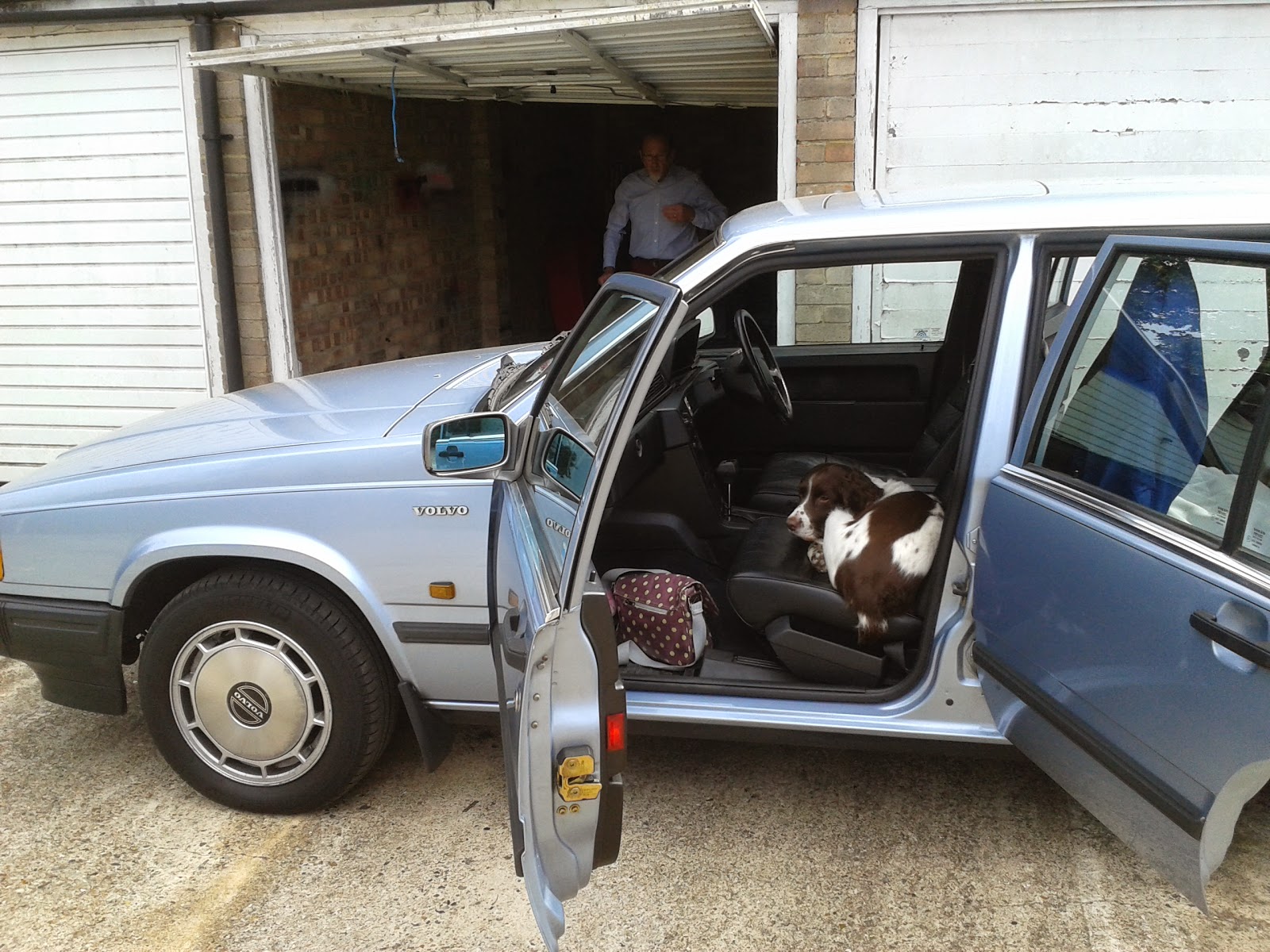 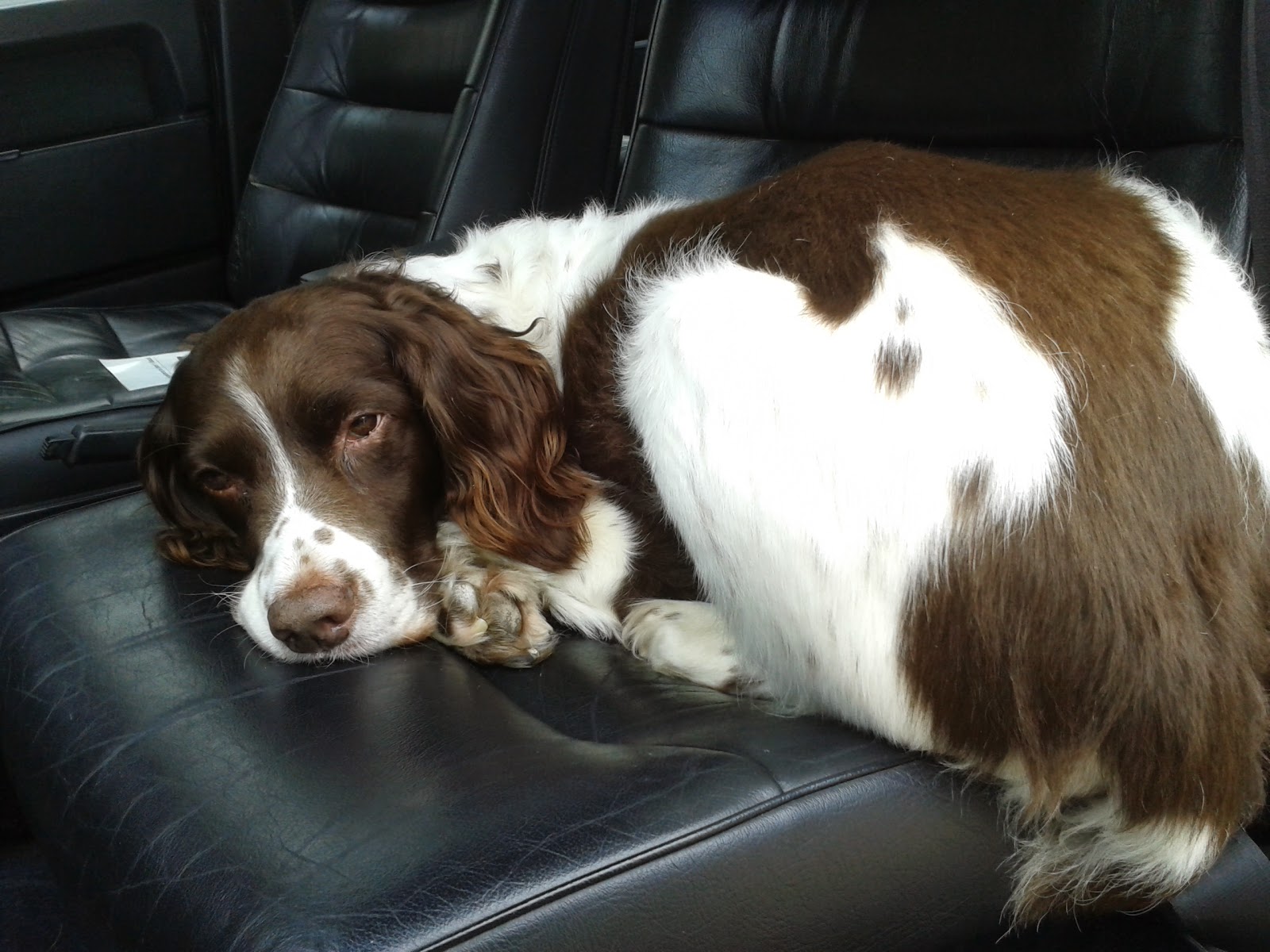 The beach at Hunstanton is a huge sandy one and dogs are allowed - there were dogs of every shape and size enjoying themselves along with lots of people relaxing at the beach.  I think everyone is taking advantage of the last bits of summer.

Once we let Boo off the lead he was in the water and then he headed off to who knows where - I forgot to mention that he's a little deaf, has poor sight, and we're sure he has a bit of dementia setting in.  So with all that, he wasn't returning to us and seemed to think we were another couple that were further on.  Luckily Ken had forgotten his phone, otherwise you would have a very comical video of me running (yes, I'm as shocked as you are) in the water to try and catch up to him, and Bertie giving me the slip on several occasions.  It was only when he stopped to try and get another dogs ball that I managed to grab him. 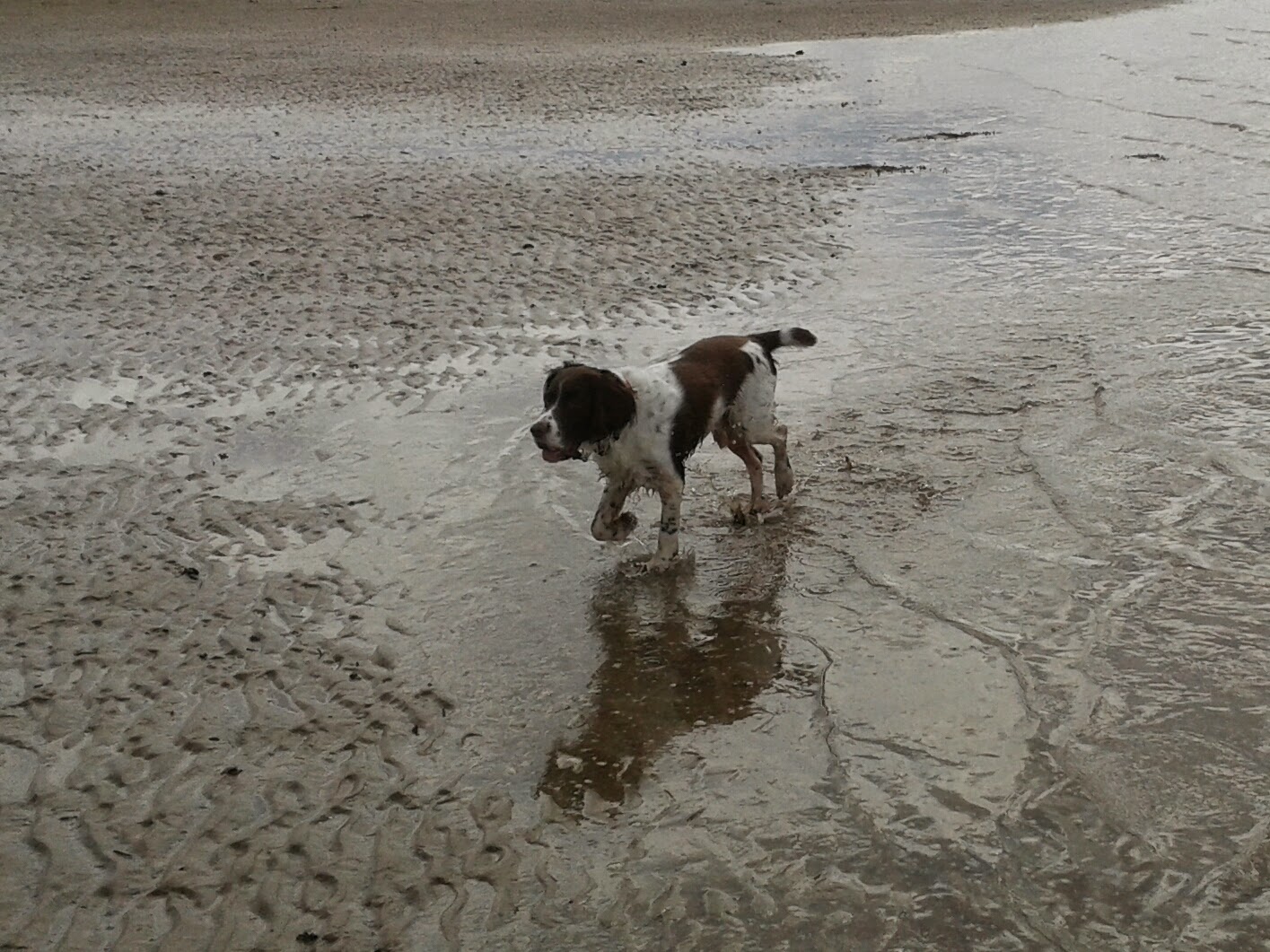 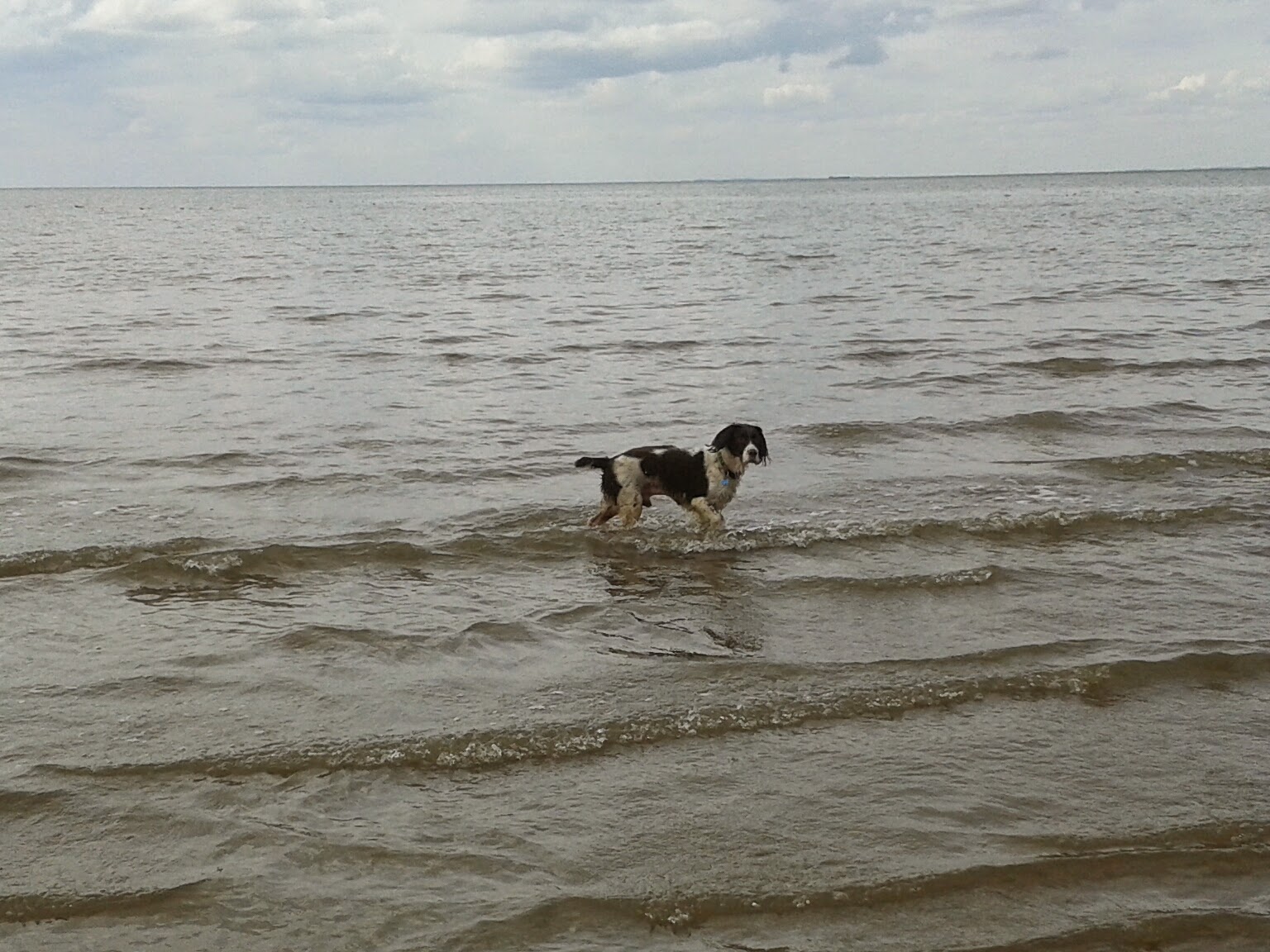 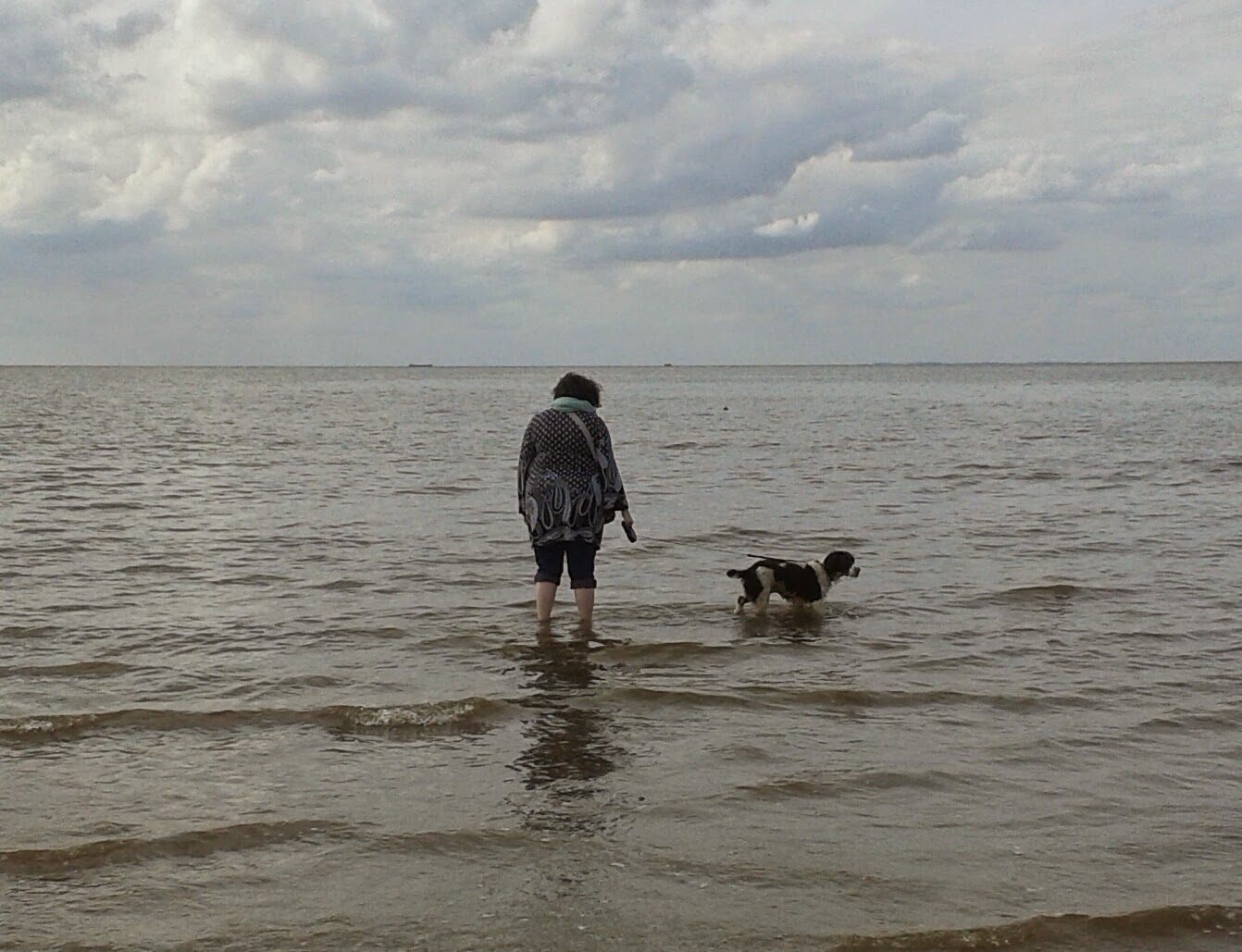 After I'd caught him and reattached the lead we both went for a wander in the sea - it's very shallow for quite a way. 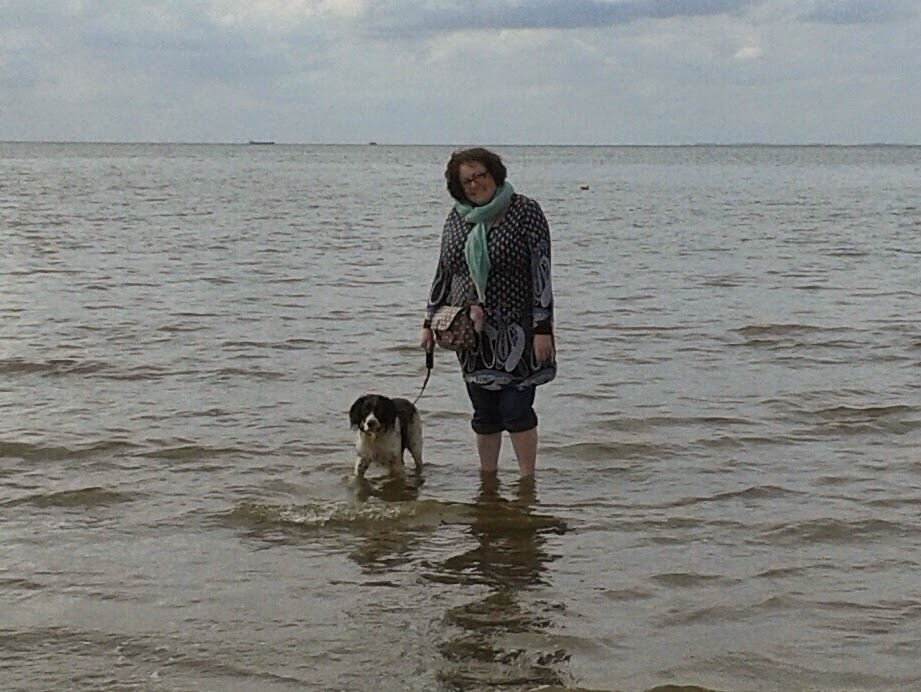 Bertie got to sniff and be sniffed by lots of dogs including a very cute Cocker Spaniel and a gorgeous French Bulldog - he also got put in his place by a Boxer who dunked him under the water.  Once we were sure he knew where we were we let him off the lead again and then him and his daddy had some fun. 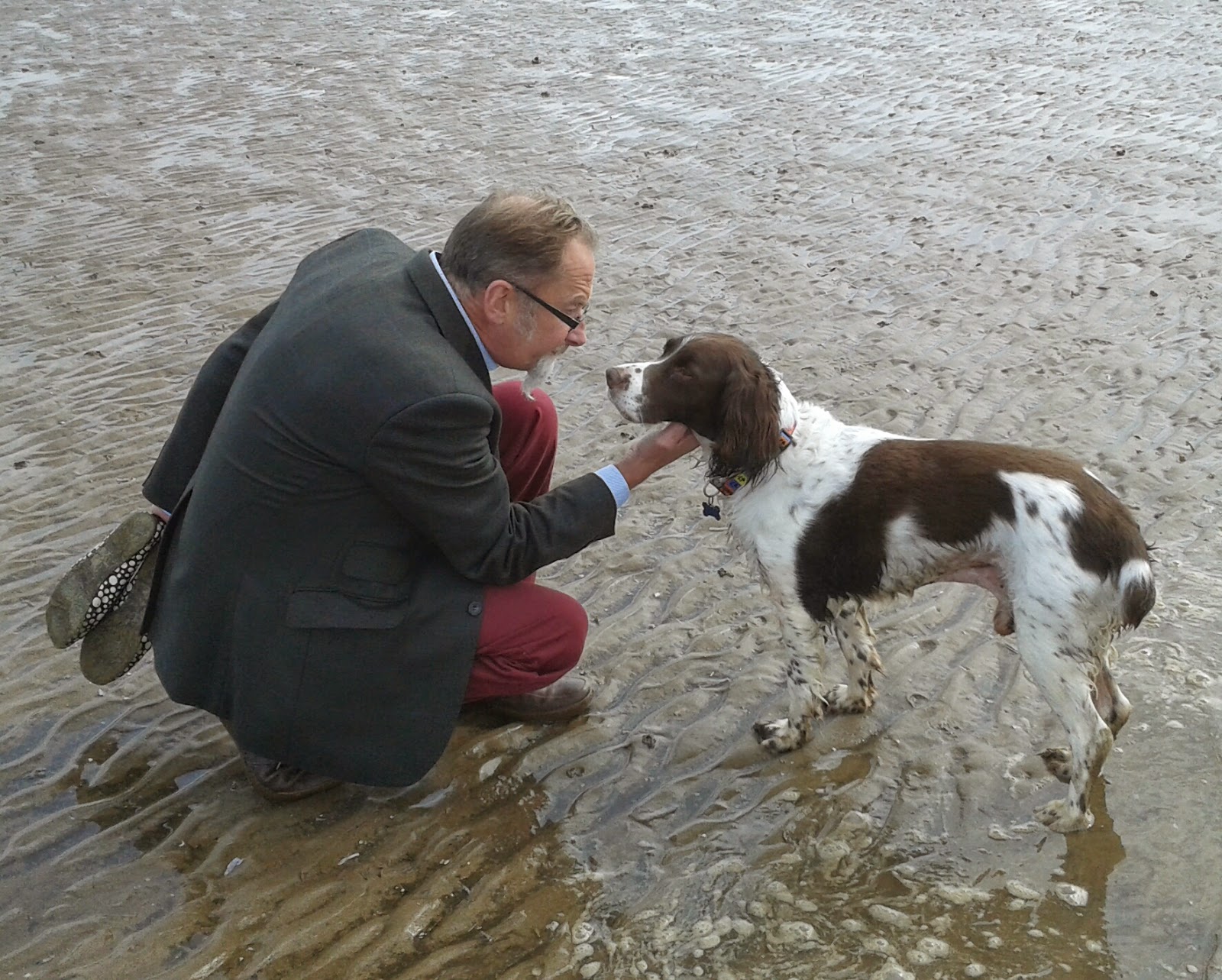 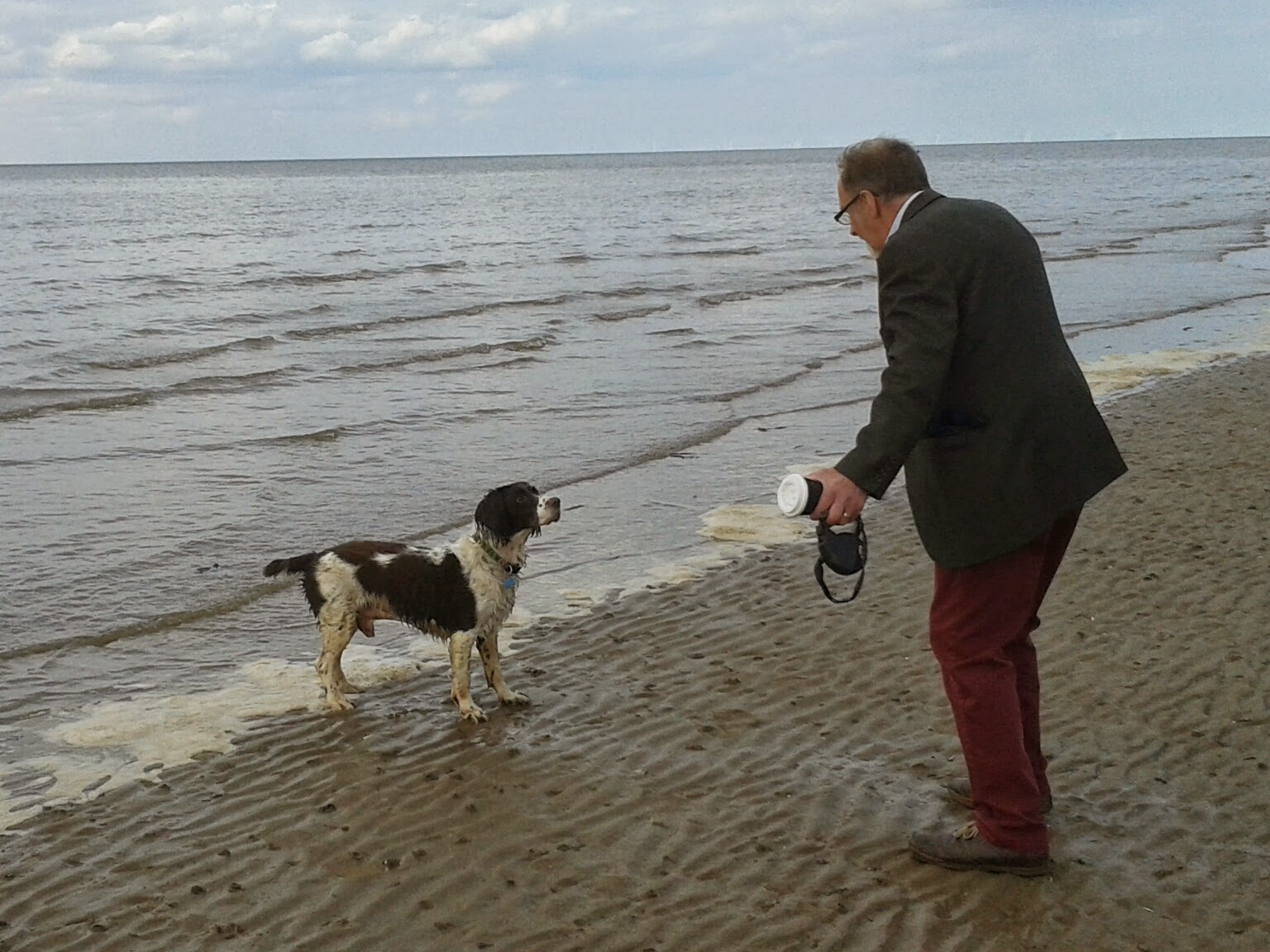 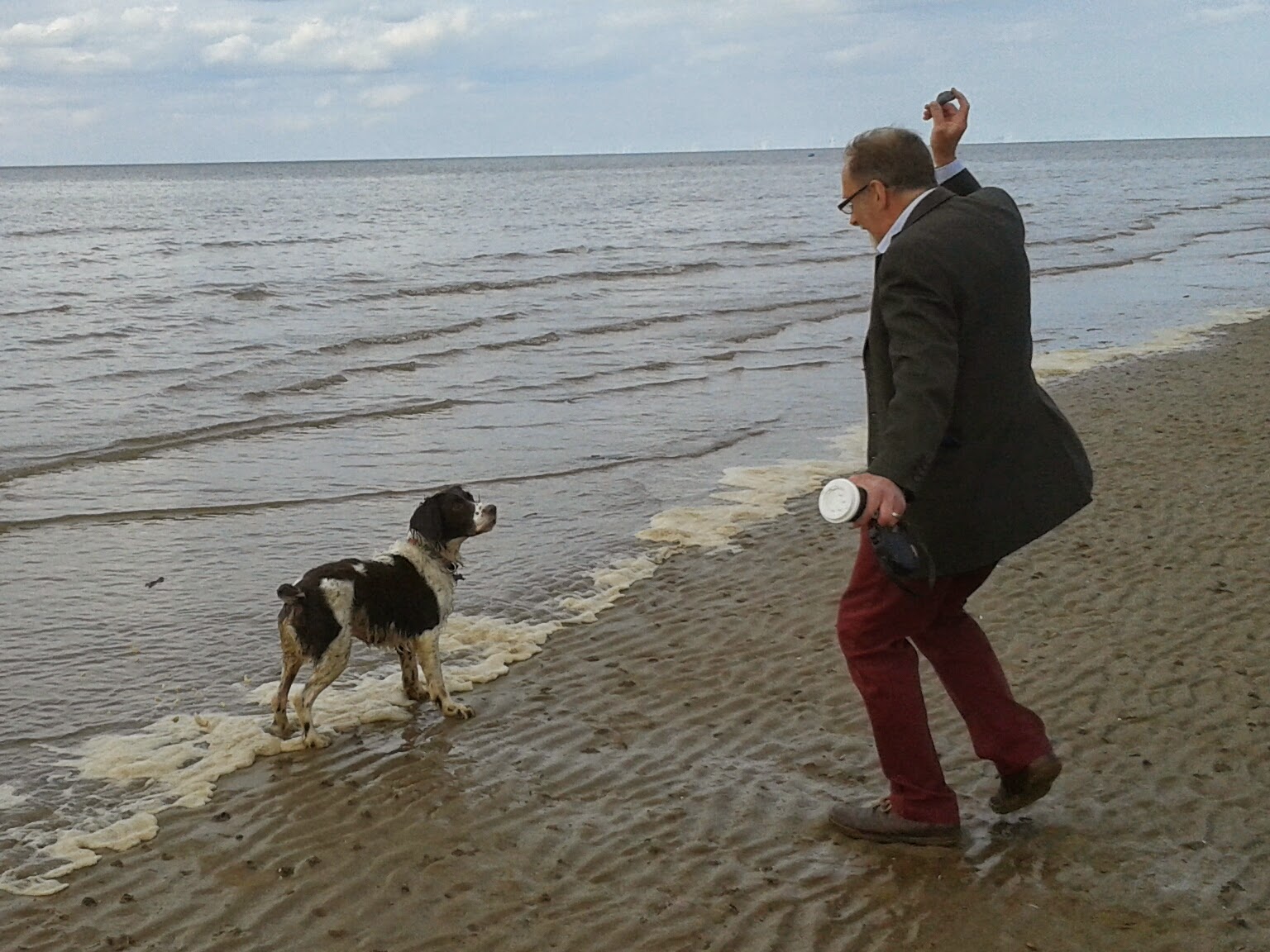 Now I know it looks like Ken is highland dancing, but he's actually throwing things for Bertie
When we got back to the car it was time to dry Bertie off before going onwards - I think he suits the towel turban look. 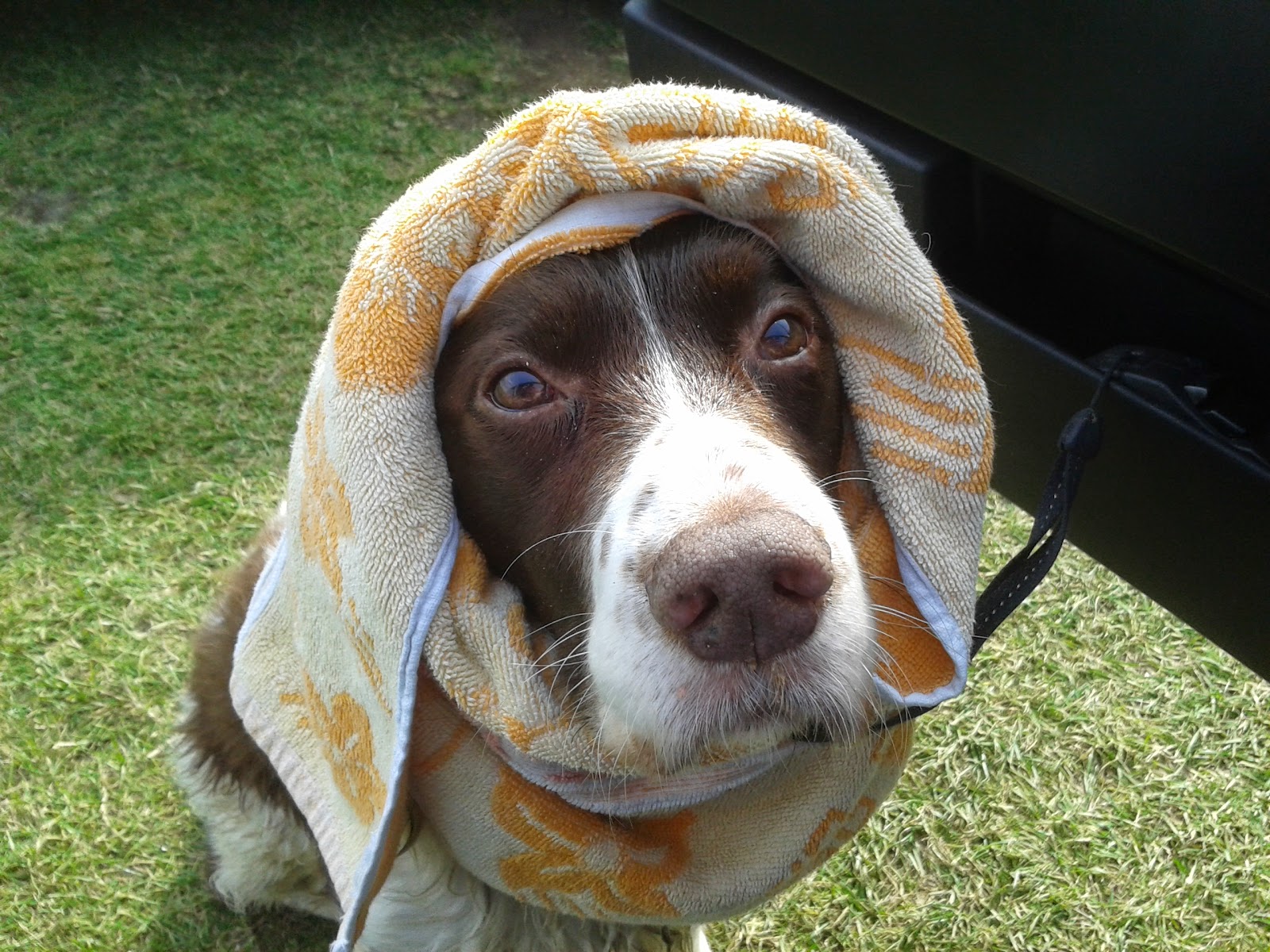 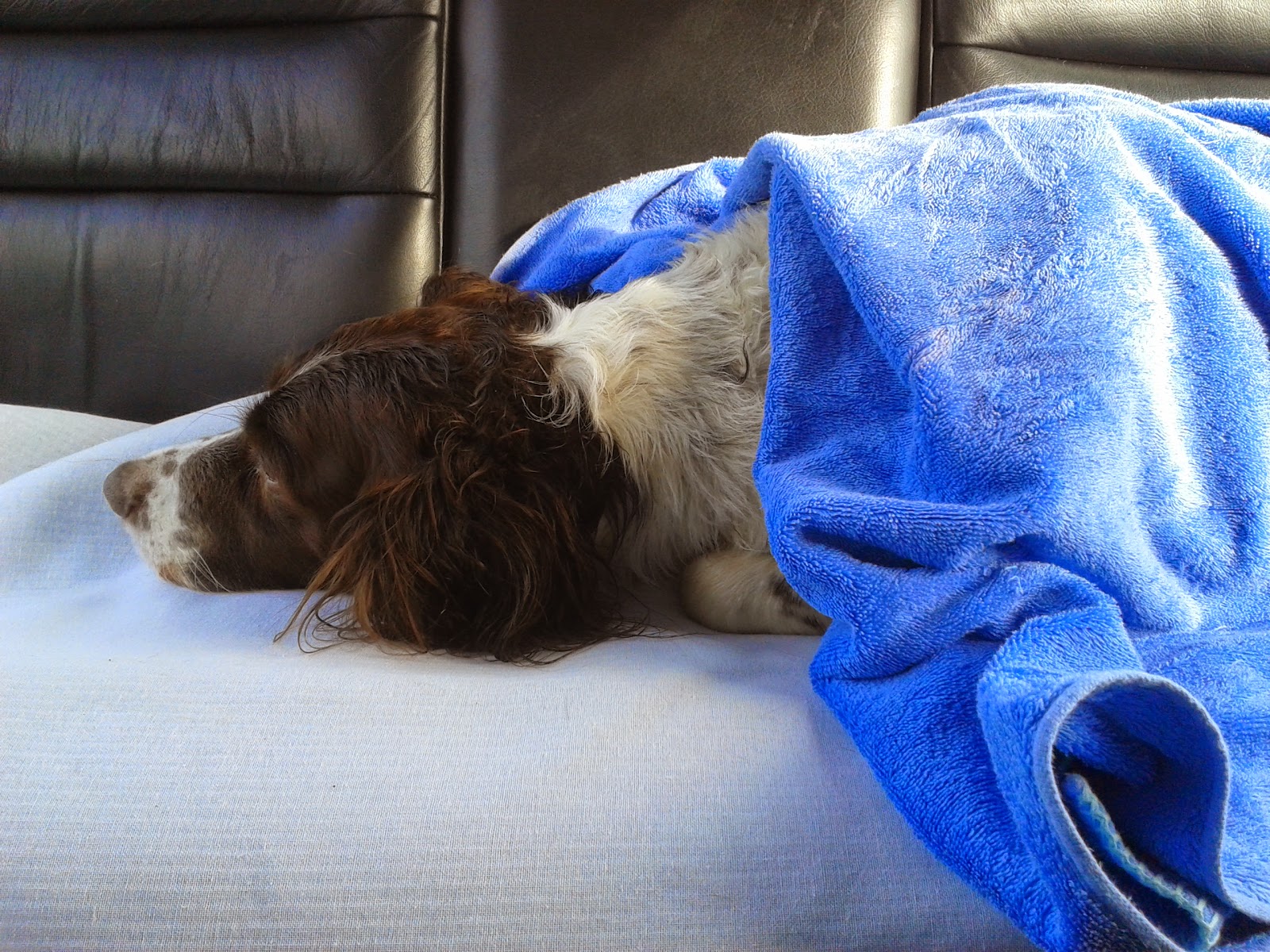 We drove to Ely to find somewhere to eat that was dog friendly.  We found a lovely hotel/pub that allowed Bertie Boo in and after not eating for the last week he helped me eat my ham that I ordered. 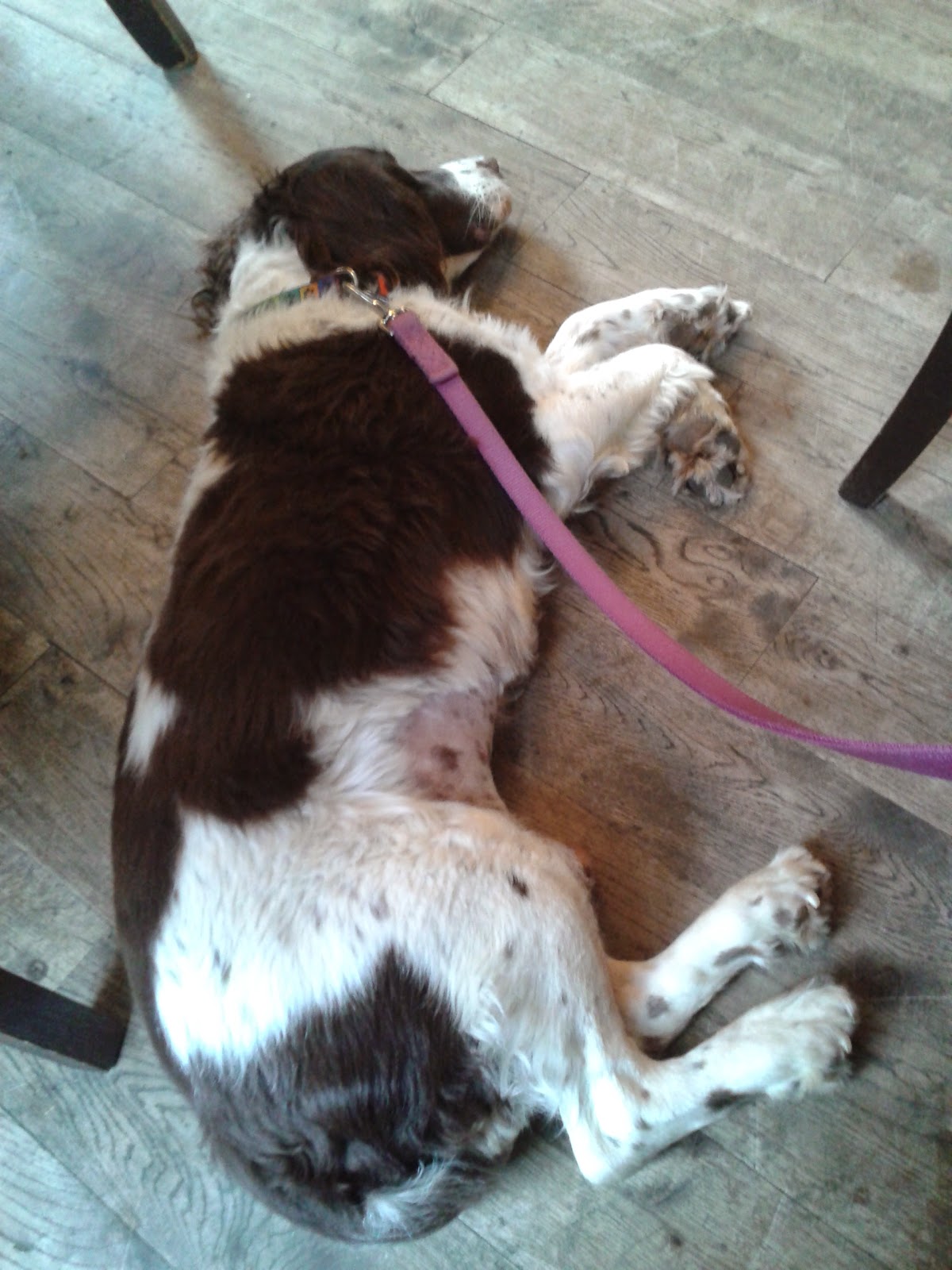 After our meal we went for a wander around the outside of Ely Cathedral - it looks an amazing building and we will definitely be coming back to look at the inside.  Here's a few shots from the area. 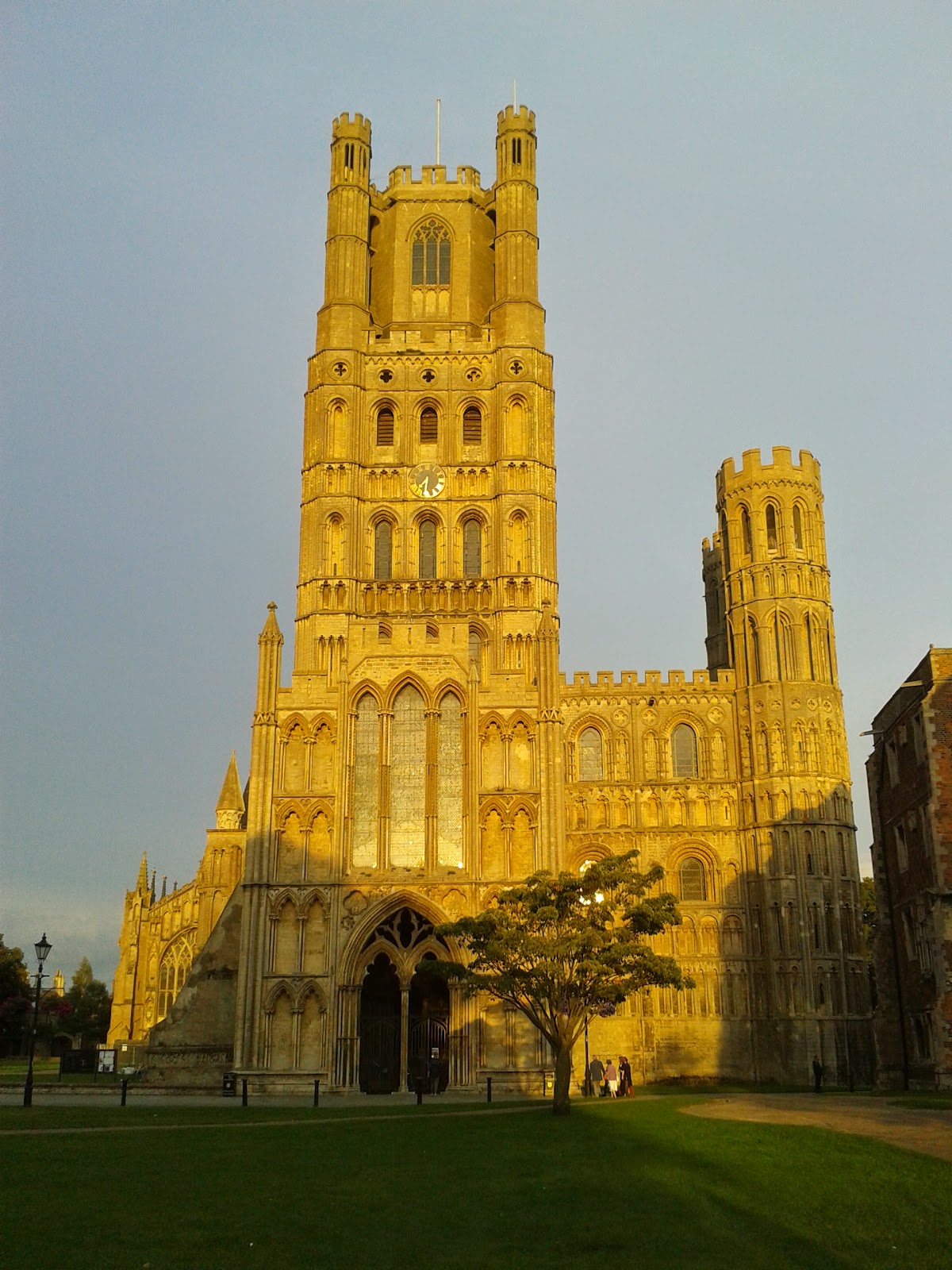 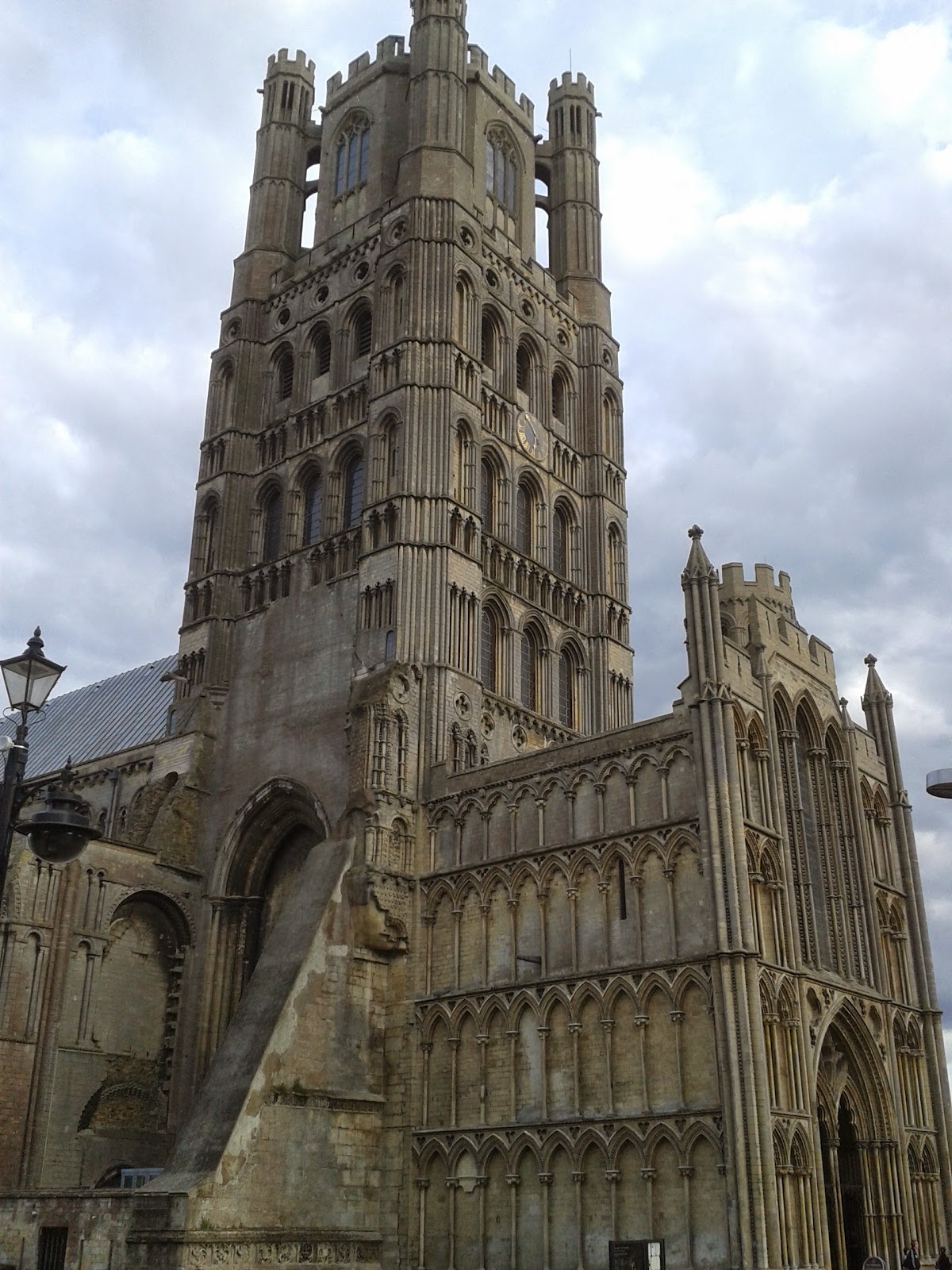 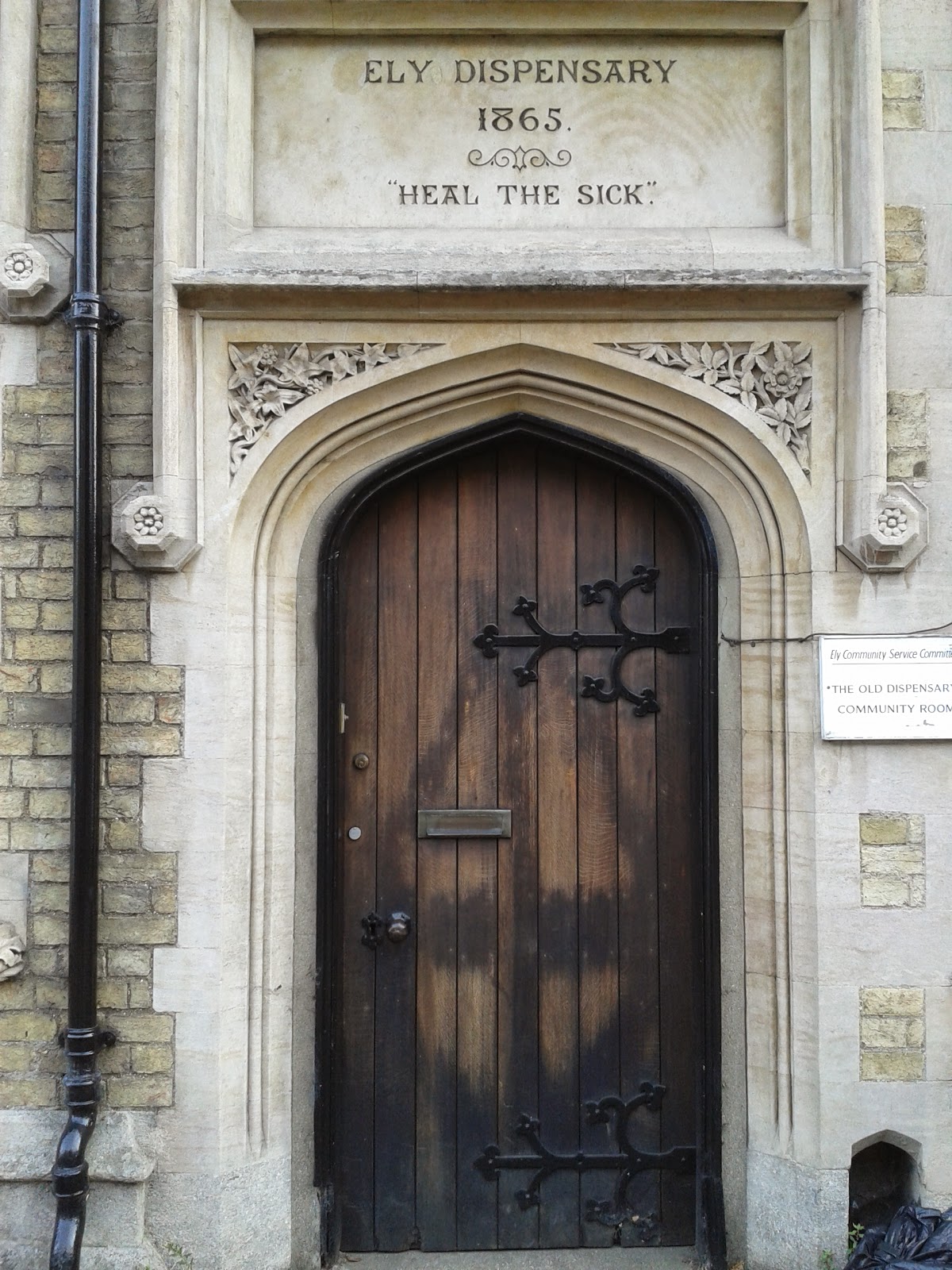 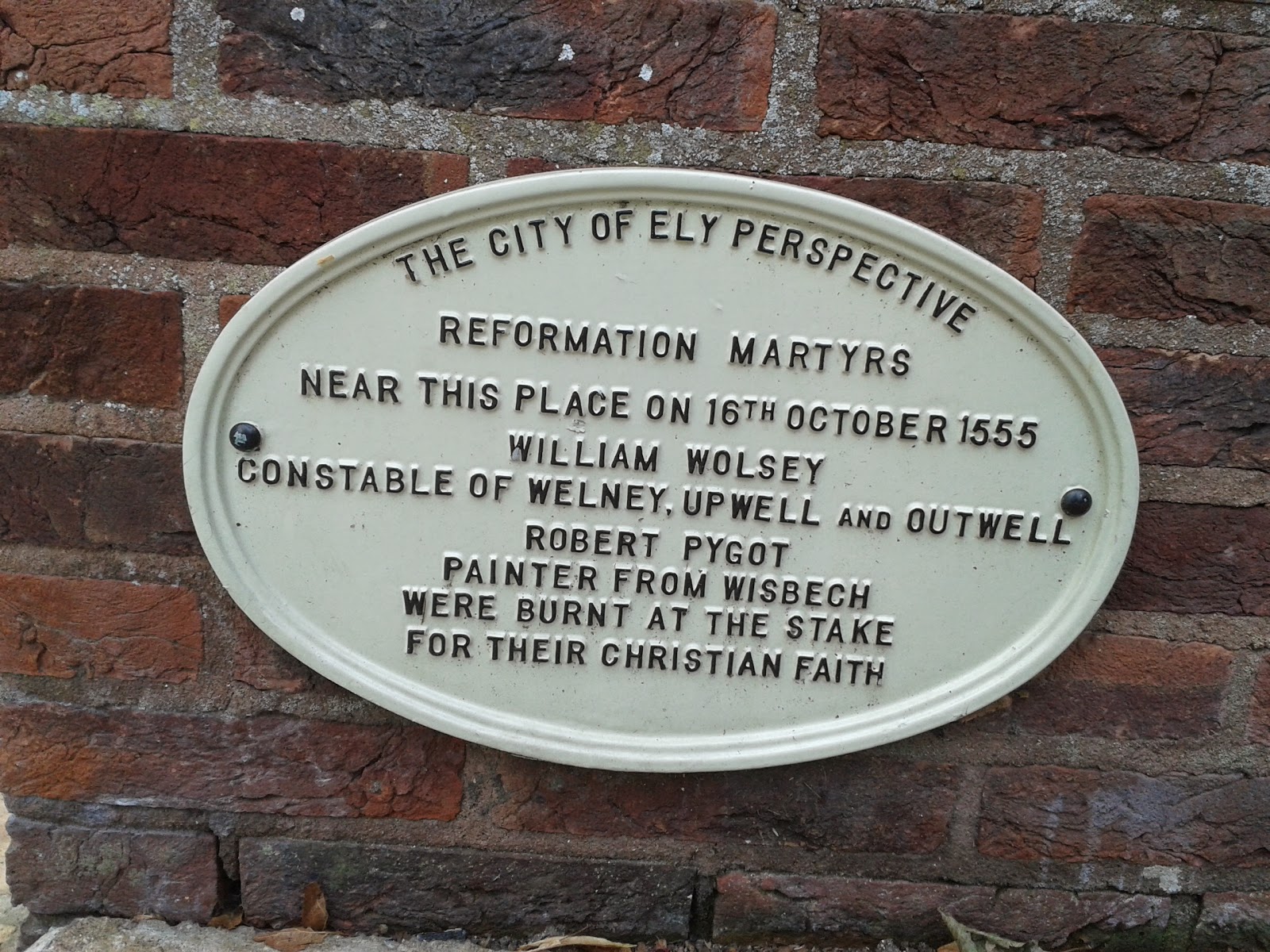 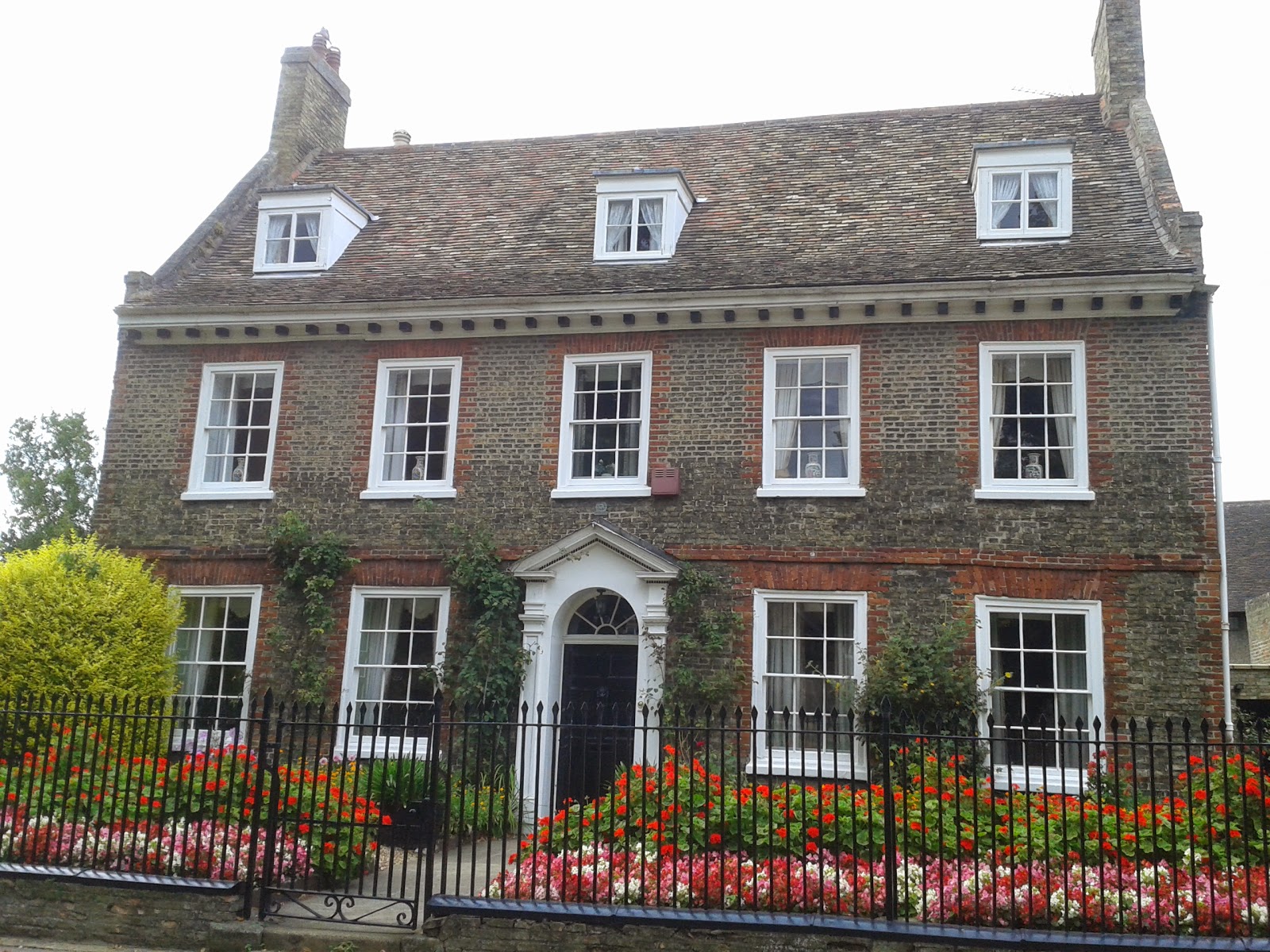 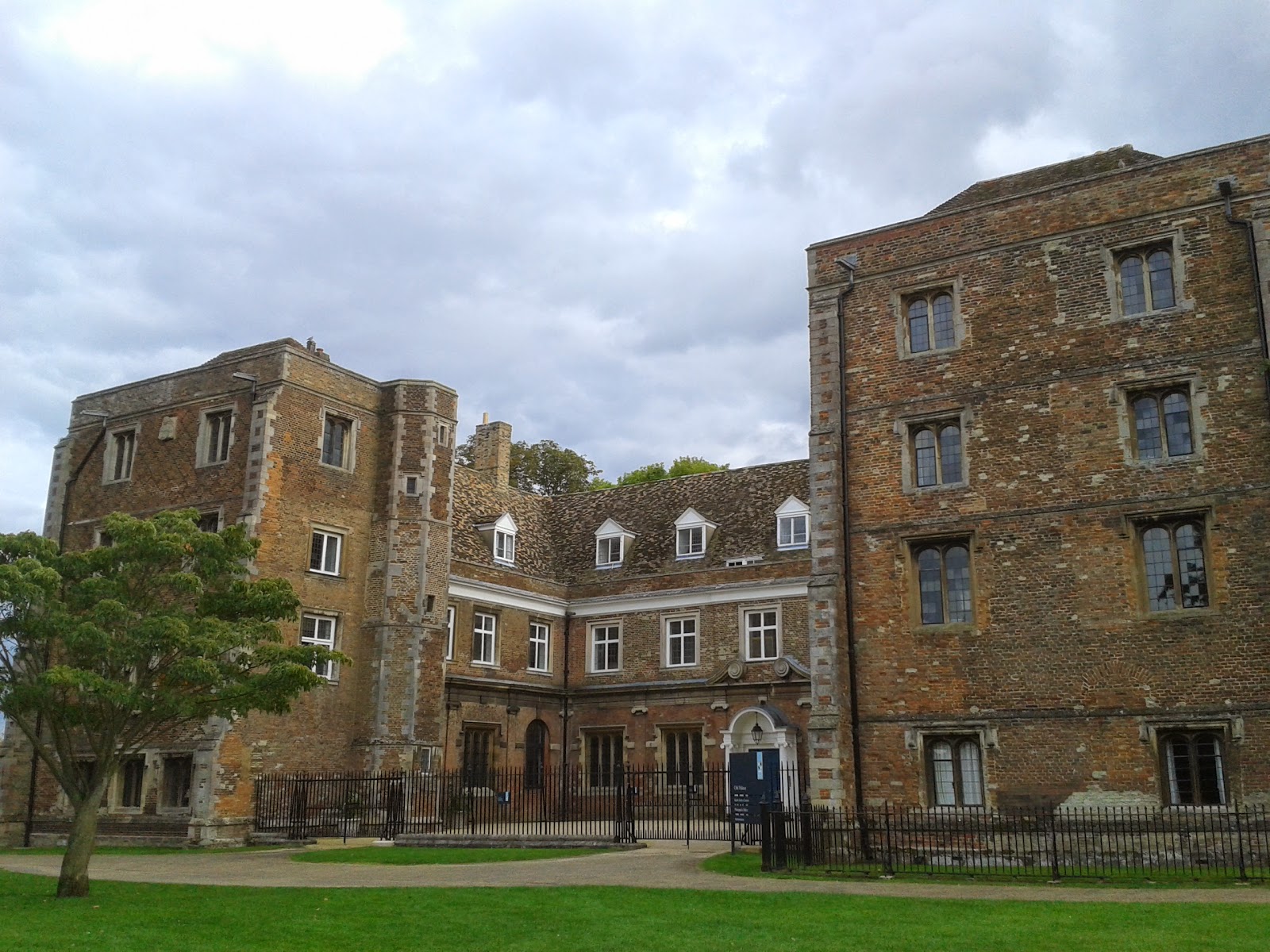 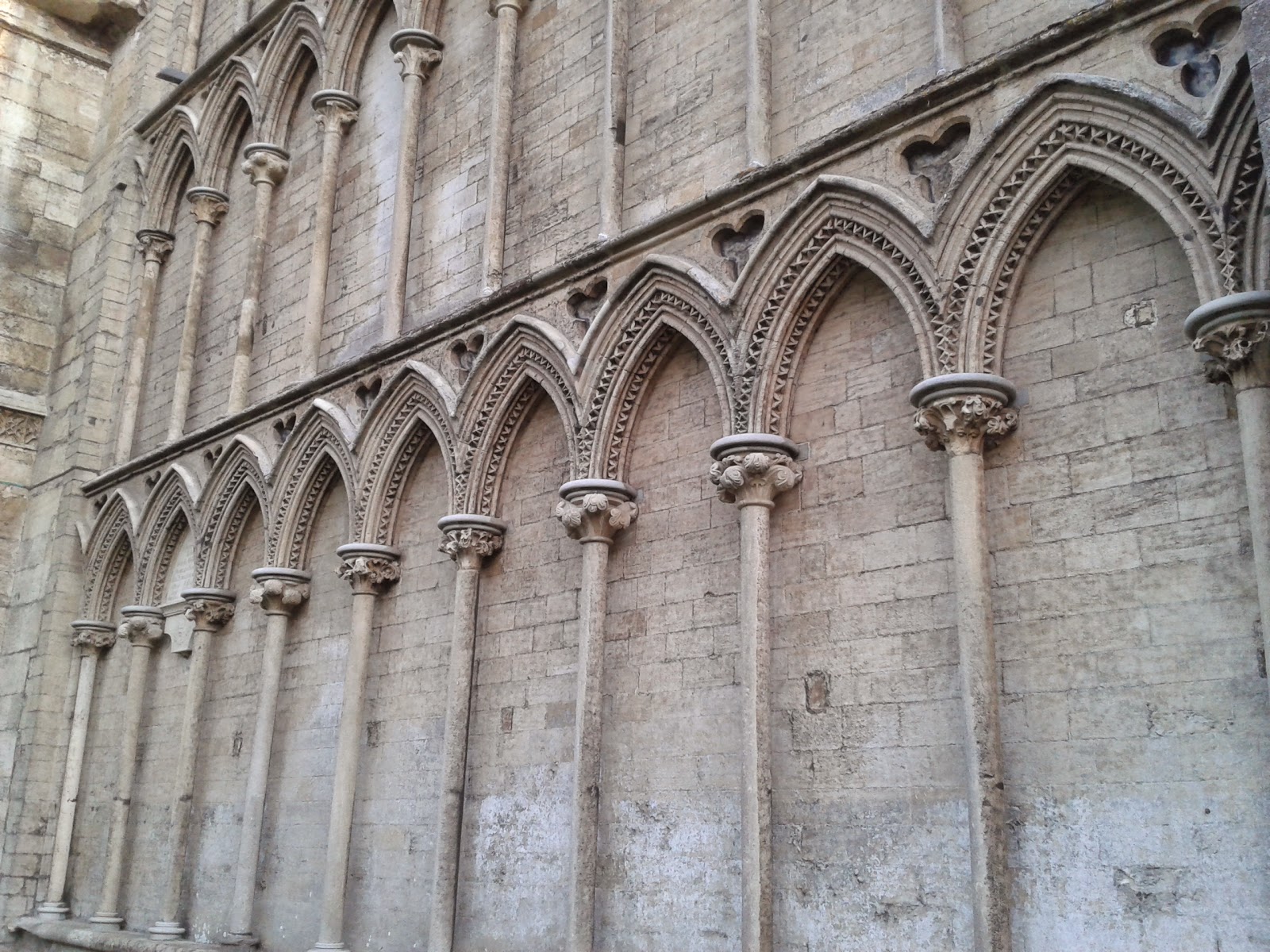 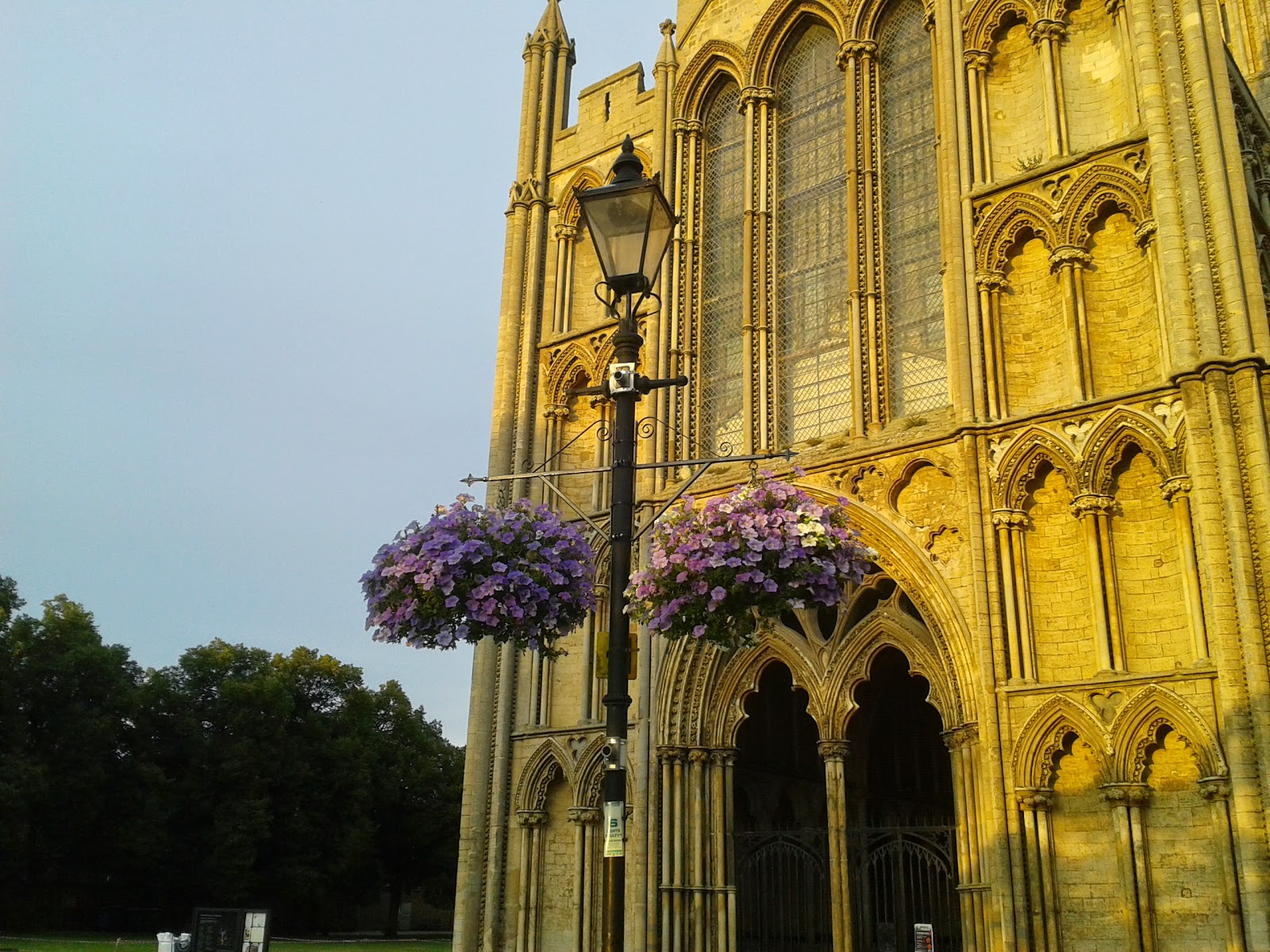 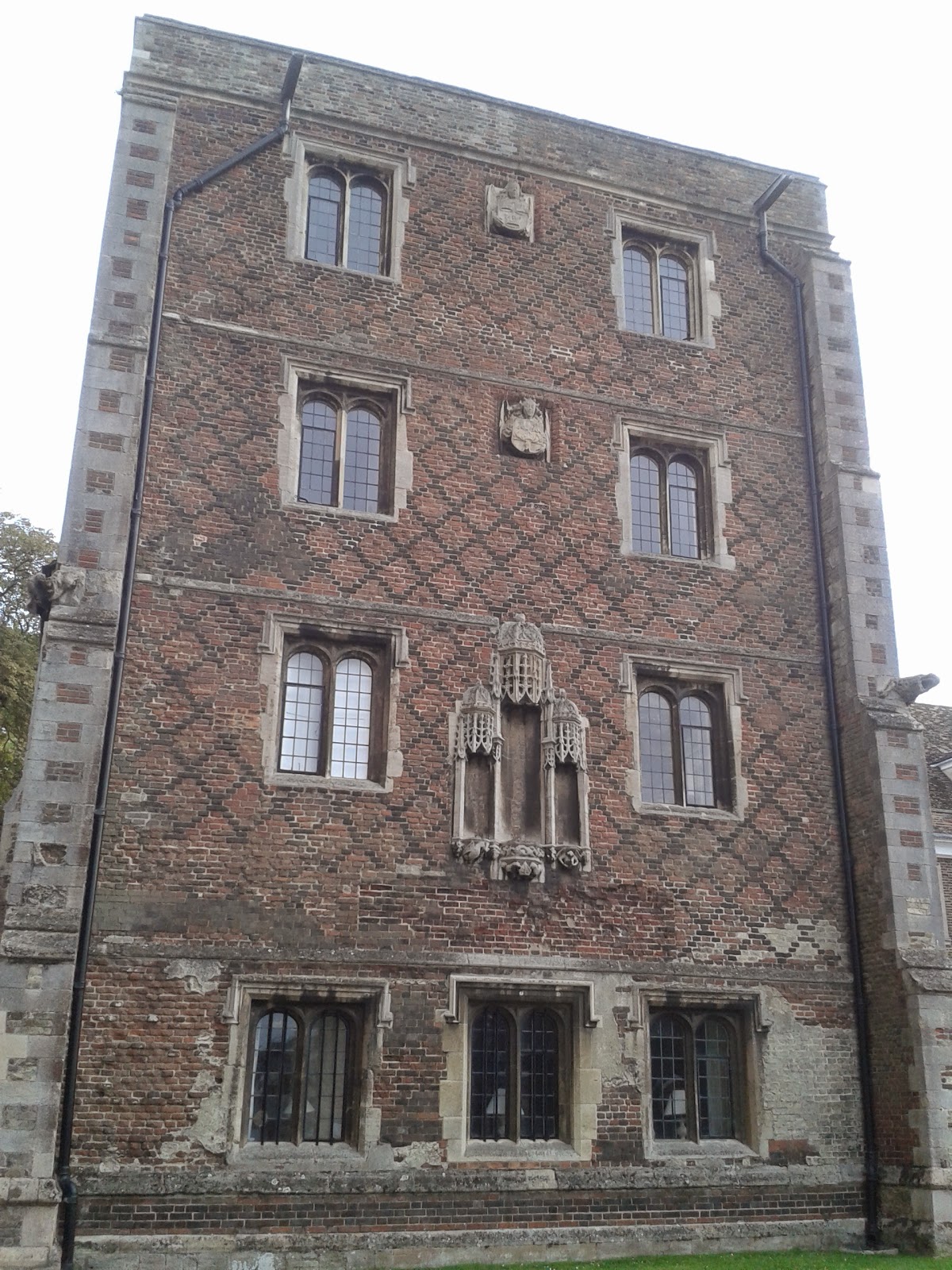 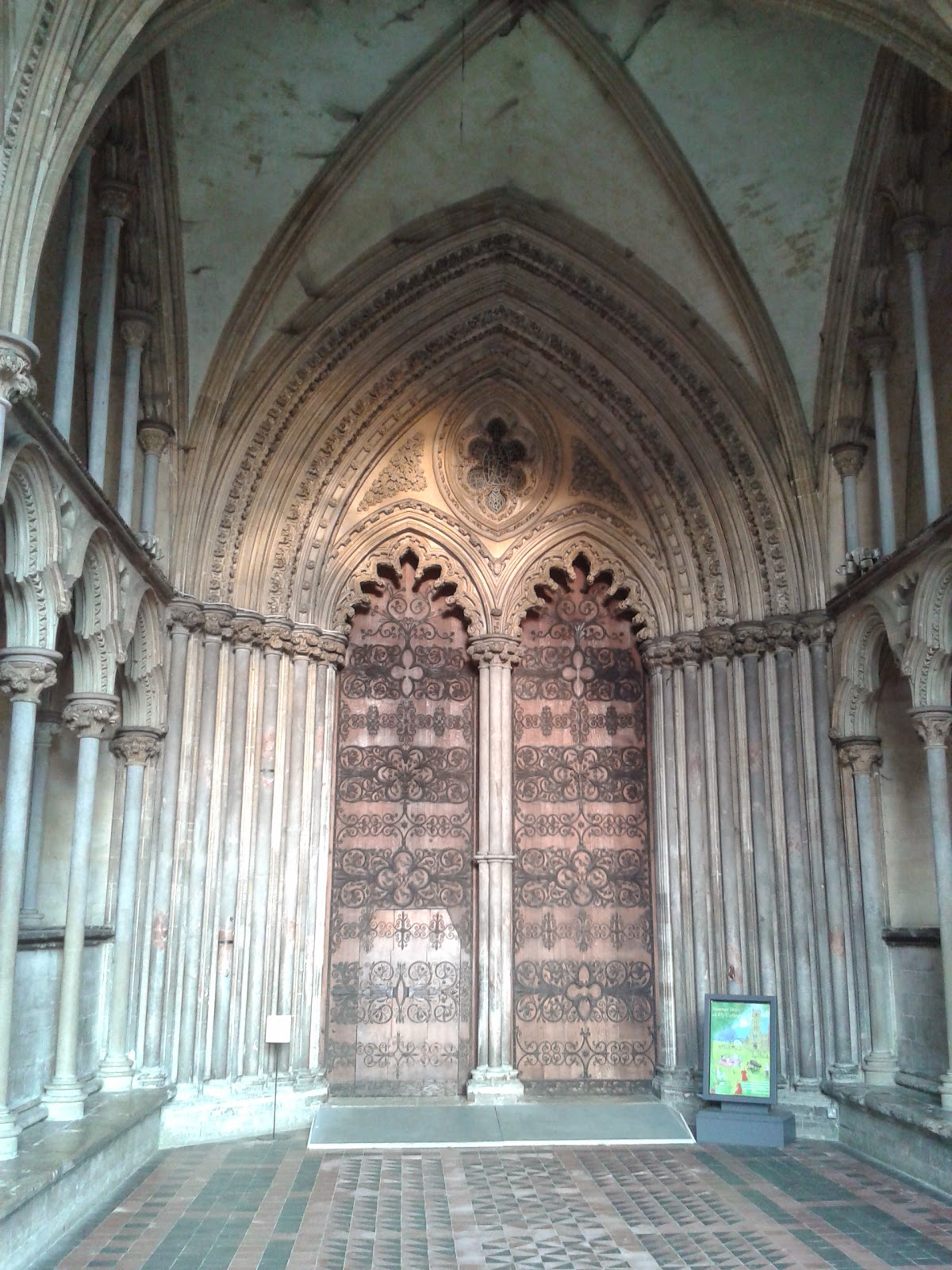 So that was our Bertie's Grand Day Out - we may not have many more but that day is a memory  we'll  treasure.

Until next time, be good, keep smiling, and if you have pets make sure that you give them an extra hug today.

P.S:  Another shot of our gorgeous Bertie Boo 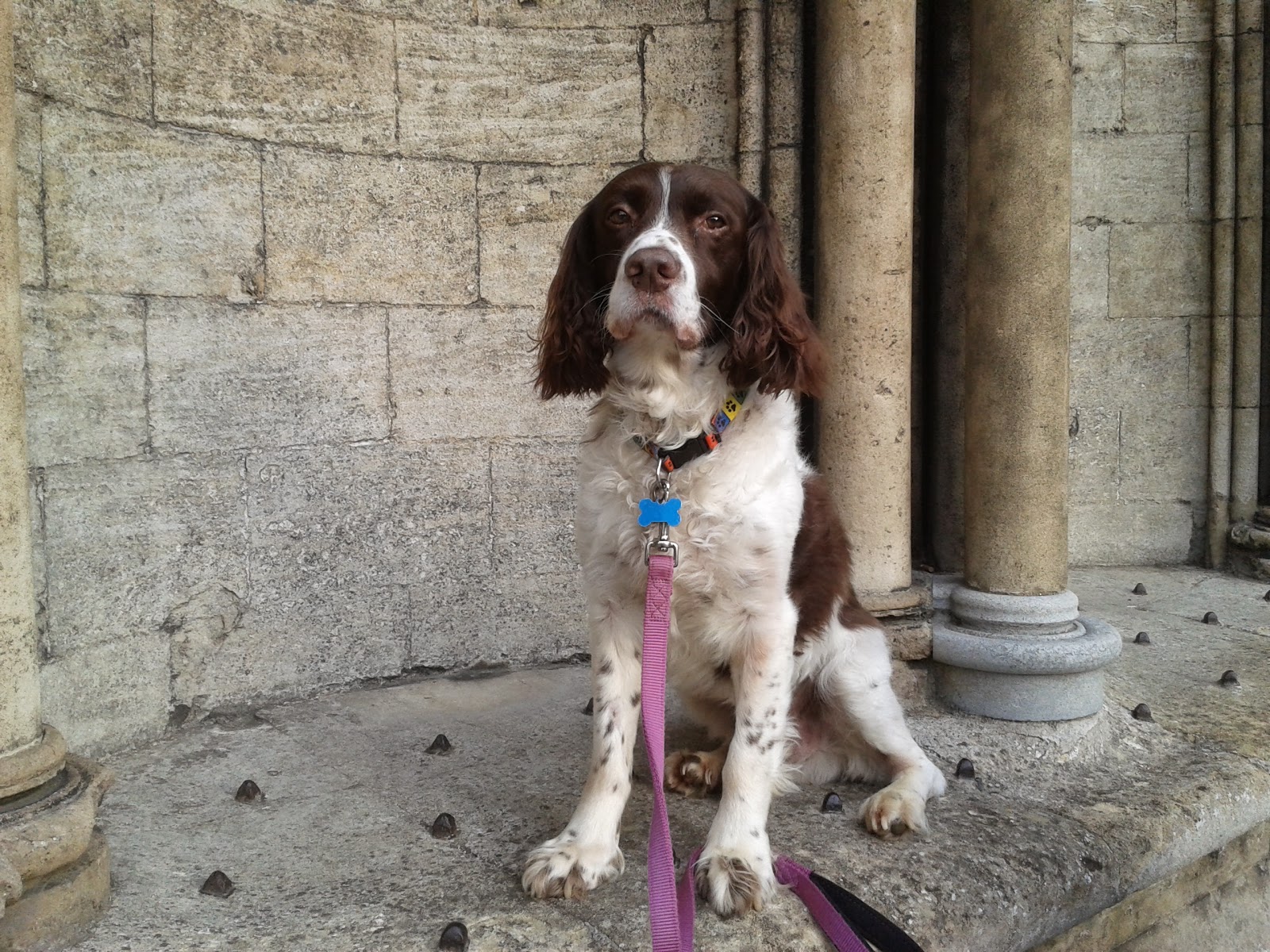 Enter your e-mail address to receive new posts direct to your inbox.