L is for Loch Ness

We're up to the letter L in the A to Z blogging challenge and living in the highlands of Scotland I had to do Loch Ness. That iconic body of water that people all over the world have heard of, mainly because of the supposed monster living in its depths. 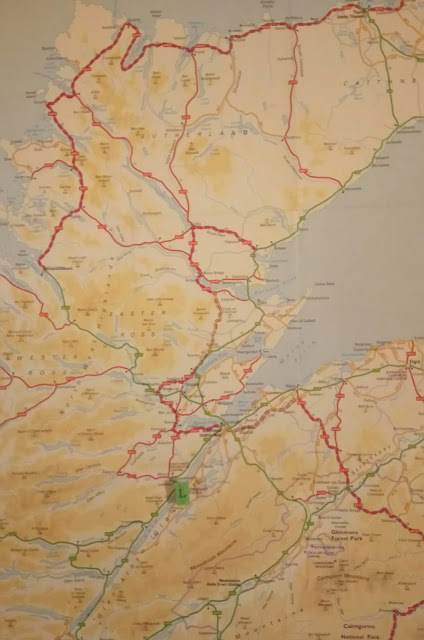 The size of Loch Ness has always amazed me, and especially fact two on the information board below - it holds more water than all the lakes in England and Wales put together!!! 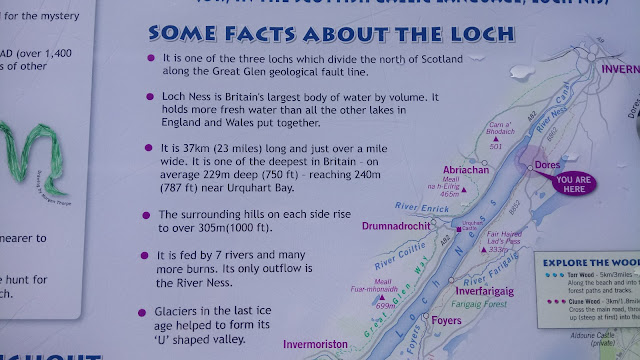 At the north end of the loch is the little village of Dores and a very popular beach that becomes very busy in summer for water sports, but even in winter it's a great place to walk on a crisp cold day as you look down the massive stretch of water. 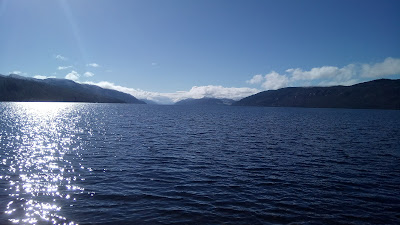 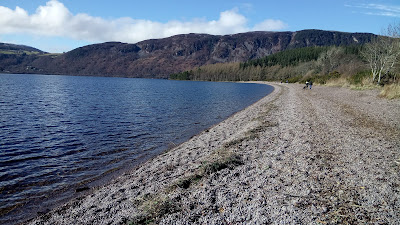 The Dores Inn is a great place to eat, and they allow dogs inside, which is always nice to see. I'm sure when she's a little older Bramble may be able to sit still long enough for us to eat a meal with her there. 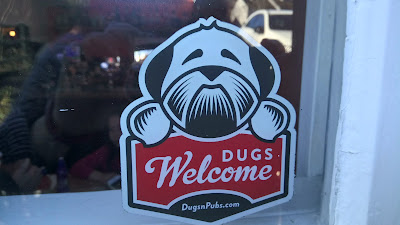 We both had seared tuna and it was scrumptious. 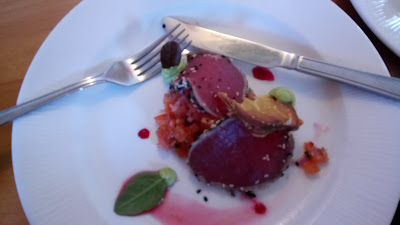 Now onto the monster that lives in the deep dark waters of Loch Ness, Nessie as she's affectionately nicknamed. According to the information board at Dores, the first recorded sighting of Nessie was in 565 AD and the theories of what Nessie is have ranged from a dinosaur, giant eel, and, my personal favourite, swimming circus elephants.

By the beach in Dores is a camper van with the sign, NessieHunter.com. This is the home of Steve Feltham who moved to Loch Ness in 1991 in order to search for Nessie. This is where he lives full time, even in winter, hoping to catch a glimpse of the monster. 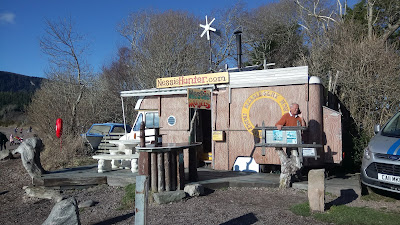 There is a huge tourist industry around the search for Nessie, including cruises on the loch, tour buses that stop at all the strategic points, and lots, and lots of souvenirs to take away a little bit of the magic surrounding the hunt for Nessie the swimming elephant. 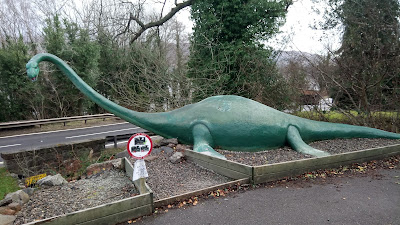 There are many cuddly toys. 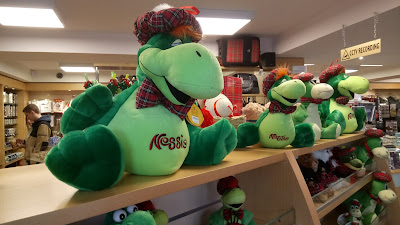 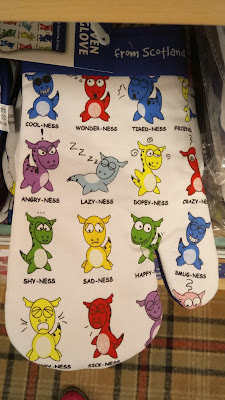 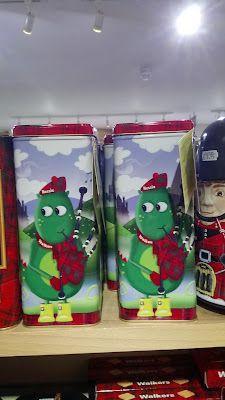 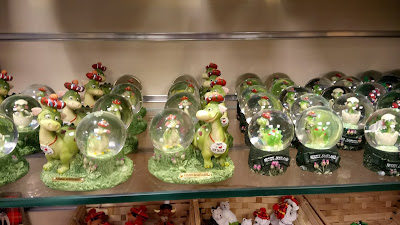 And lots of different items of clothes. 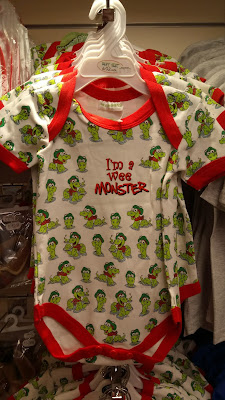 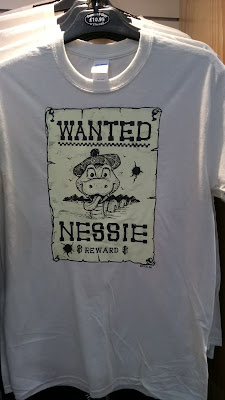 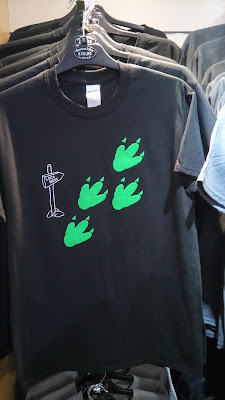 There were even beers with monster inspired names but that was the point where the shop assistant asked me to not take photos, so you can just imagine what they're like. 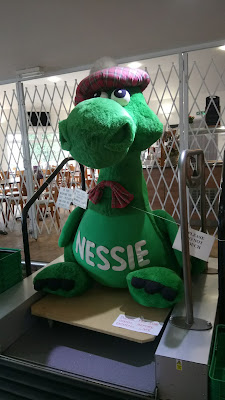 Looking across the water you can see clearly why, in the 1950's, John Cobbs decided to use the loch as the place to break the water speed record in his boat Crusader. Unfortunately, after he had broken the record and was slowing down, his boat hit a 'bump' in the water and disintegrated. John, who became the first man to travel at more than 200 mph on water, died shortly afterwards and is commemorated by a cairn that sits beside the A82 overlooking the loch. 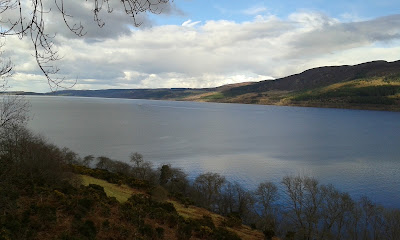 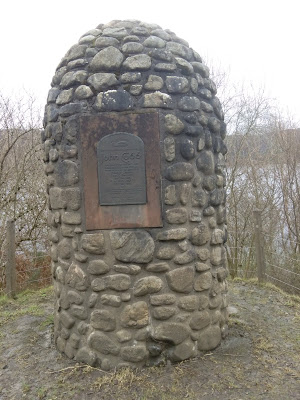 At the bottom of Loch Ness is Fort Augustus and it is yet another hot spot for monster searchers. Here's a wire framed Nessie which in the spring/summer is filled with flowers. 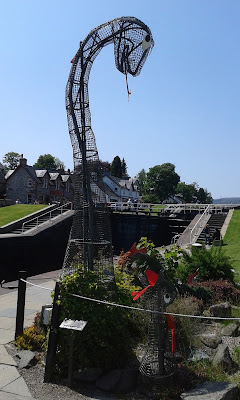 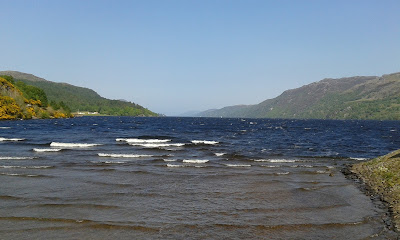 So there you have a visit to Loch Ness, a beautiful and huge body of water with lots of history and a giant monster living in the depths. Before you go, why don't you pop over to the A to Z blog to see what my fellow bloggers have come up with - click HERE to visit.

Until next time, be good, stay safe, and I wonder if you have any mythical creatures where you live.